Get ready for hay fever season! 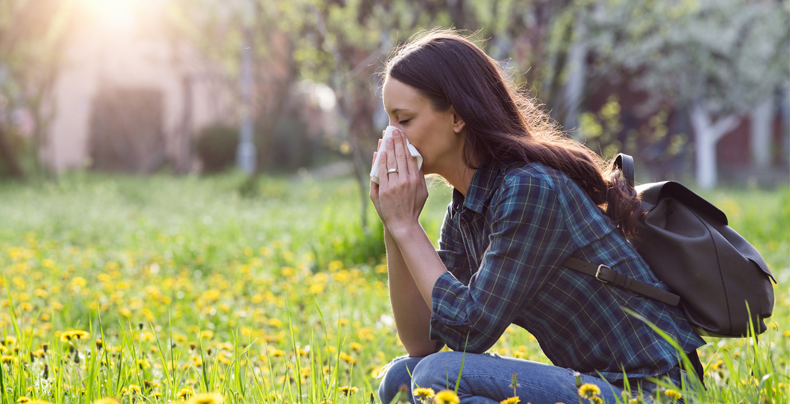 Some of you may feel that hay fever lasts forever over and above the main seasons which spread, approximately, from mid-March to the middle of May, then the next season kicks in from the end of May through to July. It may feel however, that there is no gap in between to rest those itchy eyes and sneezing etc., which are some of the symptoms.

For the unfortunate, there are two other potential seasons. June – August for weed pollen, and September-October for mould spores.

Hay fever can make you irritable and is generally debilitating, with all that effort in sneezing and wiping a runny nose, so try to prepare yourself for it, and don’t mistake it for a summer cold.

The earlier season is usually caused by tree pollen as we go from bare branches to lush green leaves, whereas the later season is down to grass pollen. Around 25% of people suffer from allergy to tree pollen, while a huge 95% are unfortunate enough to ‘go hiding’ when the lawnmowers come out!

Do bear in mind that there is no set time for the duration of hay fever, nor its seasonality. Whilst symptoms imitate some of those of the summer cold, hay fever continues far longer, whereas a cold can be cleared up within days.

If you suffer from similar symptoms at other times of the year when hay fever is not prevalent, it would be wise to try a Complete Sensitivity Test, which can tell you whether a foodstuff is causing you concern, or an environmental issue. These tests are pretty comprehensive and will certainly give you a firm starting point. See our in depth information on what this test shows, here.

What symptoms are there?

Generally speaking, the common symptoms are:

You may experience a slight cough or even a tightness of chest, but these are less common. If you have a cough that persists, do consult your GP to ascertain if this is actually allergic rhinitis. Whatever your full symptoms are, you may need to use an allergy test to ascertain the root cause of your hay fever. Whilst not serious, rhinitis can be longer lasting and appear at various times of the year. It can also lead to other conditions such as sinus problems, polyps and middle ear infections, which definitely need to be followed up. Any or all of these symptoms associated with rhinitis, can be present the whole of the year.

Is there any treatment available?

There is no magic cure or potion to get rid of hay fever, it is what it is. There are medications to alleviate symptoms, which your GP or Pharmacist can recommend. Easing the symptoms when the pollen count is high really is important to be able to work or carry on as normal, such are the effects of hay fever. Most of the treatments or ideas involve spending money though!

You should start using OTC treatments before the season starts and continue through. Your GP will probably recommend antihistamine tablets/nasal sprays/eye sprays. In more severe cases, your GP may recommend a nasal spray which contains steroids, and this can only be made available on prescription.

Is there anything else I can do to help ease the symptoms?

There are some practical ideas that may help, and don’t involve spending money! As awful as it sounds after we have all endured pandemics and cold winters, staying in as much as you can tolerate will help. Here is a list of helpful tips for cutting down your exposure to pollen:

These are intended to be helpful tips, but if you feel you can cope without them, feel free to enjoy the summer and hay fever!

I achieved a First-Class Honours degree in BSc Nutritional Science, Nutrition Sciences from the University of Reading and now have over 35 years experience in all types of cuisine, dietary plans, recipe development, health and nutrition. I have been writing for over 10 years for magazines and websites as well as ghostwriting for ebooks, Kindle and fully published books. I’m also a proud member of the Guild of Food writers.

I achieved a First-Class Honours degree in BSc Nutritional Science, Nutrition Sciences from the University of Reading and now have over 35 years experience in all types of cuisine, dietary plans, recipe development, health and nutrition. I have been writing for over 10 years for magazines and websites as well as ghostwriting for ebooks, Kindle and fully published books. I’m also a proud member of the Guild of Food writers.

Save big on the best wellness brands with our Health Catalogue!CLICK HERE
Share This